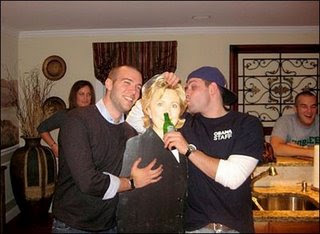 I want to begin this blog by trying to explain what is so very offensive to me about the way our Democratic primaries were run. And why I can never support an administration that took advantage of them. It's the misogyny. But, not JUST the misogyny. It's the refusal of the cultural elite to recognize it for what it is. And to call the perpetrators out on it.

It's the cultural denial that begets and encourages the kind of behaviour you see here, in this photo.

Heidi Li nails the problem succinctly when she states in her POTPOURRI that it's a matter of, not only knowing right from wrong, but internalizing it.

"I am entirely confident that Jon Favreau would not have ever, even in a moment of so-called boyish humor, have stood beside a cardboard cutout of a black male politician he dislikes and posed himself as a laughing lyncher. My confidence in that is not because Mr. Favreau is male or because his boss is black. My confidence is that somehow, somewhere along the way, Jon Favreau learned that even jokingly participating in acts depicting racial hatred is wrong. Wrong because of the social climate that it creates, wrong because it is considered as rude (if nothing else) by many people, wrong because when you are playing with deep-seated irrational hatred even minor acts can have major consequences, causing people harm and distress." says Li. And I'm sure she is right.

Dee Dee Myers is also correct, when she states that the Favreau photo is not a laughing matter in VANITY FAIR. Why? For exactly the reason (among others)that she gives:

"What’s bugging me is his intention. He isn’t putting his hand on her “chest,” as most of the articles and conversations about the picture have euphemistically referred to it. Rather, his hand—cupped just so—is clearly intended to signal that he’s groping her breast. And why? Surely, not to signal he finds her attractive. Au contraire. It’s an act of deliberate humiliation. Of disempowerment. Of denigration.

And it disgusts me."

It disgusts me, too, Dee Dee. It disgusts me to exactly the same degree that it does Heidi Li. Because it says so much about, not only Favreau and the Obama team.... but about our culture in general.
Posted by Stray Yellar Dawg? at 6:25 AM