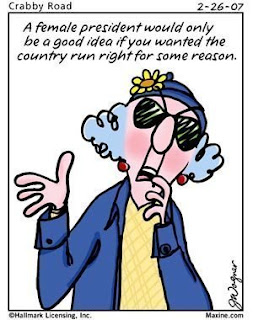 "“Bill McAllister, a spokesman for Gov. Sarah Palin, said Thursday that none of the 10 employees worked in the governor’s office and that to his knowledge no one in the office had received any of the messages, which, he said, Ms. Palin condemns.

Compare the condemnation of the above racist activity by Gov. Palin to the complete lack of response from President-elect Obama to the photo of Jon Favreau widely circulated on the Internet showing Obama’s chief speechwriter and his buddy sexually molesting a cardboard cutout of the newly named secretary of state Hillary Clinton.""

This is one of the primary reasons I like Sarah Palin. I don't agree with her on every issue. But, she is clear and concise. I know what she says, and she says what she means. I never get the feeling I am being lied to, or pandered to. And I don't think she is "campaigning for 2012" every time she utters a word.