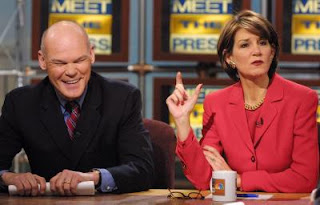 I don't read CNN as a rule. I gave it up after the Democratic primaries.

But my dear hubby called this one to my attention: CNN Report of Carville's Predictions

DH and I have both been Carville fans for a long time. Since the Clinton years. Recently this fact has been subverted and closeted, as James started to jump on the Obama wagon. But, James will always be a PUMA in my mind. He is too smart to drink the kool-ade. And he's also too smart to be out of a job. He and his marital partner, Mary Matalin, are national treasures when it comes to insider info from BOTH parties. I can only imagine what they say to each other over dinner! 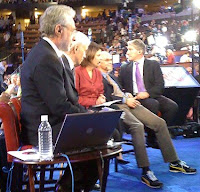 So... here's a taste of what the crystal ball is telling the Matalin-Carvilles. Read it and weep:

**The Democratic Party has had a recent run of corruption and sex scandals. Mathematicians say that there are no such things as streaks and that the last event has nothing to do with the next. The only people who disagree are crapshooters and political operatives. Since I am both, I firmly believe that there are streaks and that political scandals happen in clusters.

**Secondly, 2009 will be a year in which the Republican Party will be confronted with a near catastrophic ideological rift. There is no obvious Republican leader on the horizon, and the party is caught between its Southern/talk-radio base and the rest of the country on whether they should oppose or cooperate with Obama's administration. The combination of the lack of an obvious leader and the general political combustibility of the Republican Party will lead to a dangerous fissure that will plague it until the 2012 election cycle.

What this means to me is that while the GOP has no established leader for the coming period... there is a vacuum there. A void wanting to be filled. That is an opportunity for Sarah Palin, who is amassing support across the spectrum of GOP loyals. And even some outsiders.

In the meantime.... the GOP talkers have nothing to do but twiddle their thumbs.... and look for Democratic party scandals. I don't shoot craps like James says he does.... but I can see the handwriting on the wall when the likes of Rush and Sean get bored. (Not complaining. Just saying.) Investigation after investigation after investigation. Spitzer, Edwards and Blago are but the tip of a very large iceberg.
Posted by Stray Yellar Dawg? at 5:53 AM