How Dare That Uppity Bitch! "Nobody Even Likes Her." 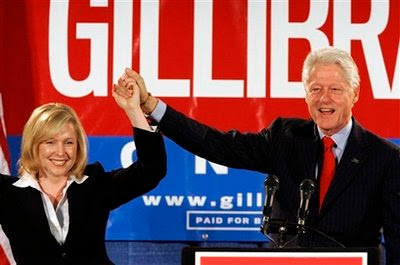 ""But many of those who know Gillibrand best — Democratic members of the state’s congressional delegation — weren’t exactly high-fiving over the pick, and not just because several wanted the job themselves.

“Nobody really likes her,” sniped one New York City-area member, speaking on condition of anonymity.
“She's smart and capable, but she's rubbed people the wrong the way,” said another.

As Politico reported earlier this year, Gillibrand alienated some of her colleagues by trying to leap-frog up the seniority ladder in late 2008, vying to take a vacant seat on the Ways and Means Committee that had been slated for Buffalo-area Rep. Brian Higgins.

House Speaker Nancy Pelosi was peeved at Gillibrand over the move, but the two have reportedly mended fences — and the speaker delivered a smooch to Gillibrand during her swearing-in ceremony earlier this month.

But that wasn’t the first time Pelosi was taken aback by the 42-year-old Gillibrand’s chutzpah: In 2005, Gillibrand surprised the then-minority leader at an event in New York City by announcing she intended to take on incumbent Republican John Sweeney, a Democratic aide said.

Still, in Washington, where fear is a more valuable commodity than fondness, the former corporate lawyer has earned a fast reputation as a prolific fundraiser, raking in more than $4.6 million for her first reelection effort to the House. ""

I hate to rub their noses in it (not really.) But, aren't these the same people who praised and rewarded "The Precious" for these same attributes? Didn't they laud him for his ability to campaign his way to the top ... leapfrogging over more qualified candidates, and being a prolific fundraiser???

Not becoming of a woman, you say?? Pffftttt!!
Posted by Stray Yellar Dawg? at 6:29 AM