New Year 2009, Self Portrait ... With Some Help From, Very Pesty Kitty, Timon 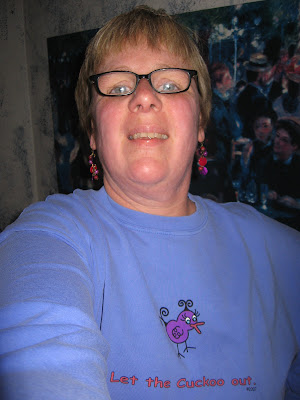 This year I am "Letting the Cuckoo Out."

Yesterday we did a mid-sized rescue from Indiana. It was a great way to start the new year, we thought! Five doggies and two kitties.

Everybody is good as gold. Really. Cept Timon. 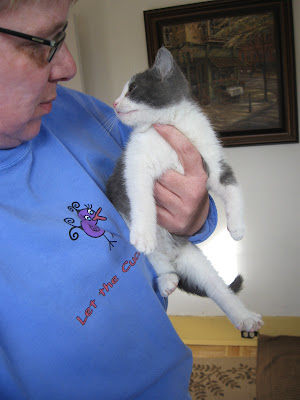 Timon won his name for mewing all the way home. He simply does not shut up. And he wanted to be held the whole way. (His friend Simba is quiet with an occasional hiss.... cuz he was a Christmas gift for a bunch of kids that scared the bejeebies out of him.)

Anyways... Simba and Timon spent only a short time in their condo together.... before I decided to give Timon the run of the office. That lasted through the night... until.... Timon heard me get up! Mew, mew, mew, mew, mew..... now he is out running the house and walking on keyboards. He was mildly interested in my own cat, Harry Potter. And he liked my big dog, Lola for about a minute and a half.

This Timon is true to his name! That is for sure!! He is adding to the craziness around here, with his continuous chatter. I guess I should not be shocked tho. When I took the "Let the Cuckoo Out" shirt for my New Years 2009 motto.... what did I expect?
Posted by Stray Yellar Dawg? at 6:55 AM