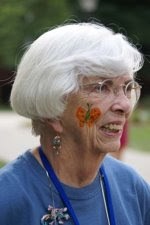 I want to keep things positive for this coming week. To be frank, I am tired of all the distortion and innuendo about "he said, she said" in the world of politics. So, I'm taking a break.

For the next seven days I am going to share some stories about real life Feminists. (Not the fakey, "superfeminists" who will do anything to sell a magazine.) I want to rejoice that I am a member of this diverse, progressive community... for which "women's rights are human rights, and human rights are women's rights."

I was pleased as punch to find THIS STORY ABOUT DOTTIE DOYLE when I signed in at the UUA website this morning.

""At a “Meet the Candidates Night,” Doyle recalls that a woman asked each of the local legislative candidates their opinion on abortion legislation. Until that very moment, Doyle said, “I had never even thought of abortion as a political issue. I didn’t know that at that time, most states -- including Maine -- had laws that totally banned abortions no matter what the circumstances. New York was the only state that allowed them, and that was with certain restrictions. I managed to stammer an answer that indicated that I thought abortions should be legal – that the decision should be left to woman and her doctor. I had an instant constituency that expected me to do something about the existing ban on abortion.”

Doyle went to Augusta, the state capitol, and told those in charge that she wanted to repeal the abortion law. Doyle was quickly caught in the legislative morass that complicated what to her seemed a simple act. She said, “I learned that I needed to introduce a bill similar to one in New York that would allow abortions only if the life or health of the pregnant woman was in danger if I had any hope of getting this passed. I introduced two bills (so that there was a legislative alternative in the process), and entered into a flurry of activity.” Doyle learned about the history of abortion legislation – that there were no bans on the procedure until the Industrial Revolution, when women were increasingly valued for their child bearing ability, as more workers were needed to support the economy. She also learned how vicious the opposition to her beliefs could be: “Not only was I vilified in the media, my children were subjected to all sorts of harassment. My husband lost his position with the Catholic Diocese, as he couldn’t ‘control’ me. However, I learned that there also was great support for my beliefs and for me from a variety of liberals, including progressive Democrats, Unitarians and Universalists, and Planned Parenthood.”"

Now I don't want to make this all about abortion. The rights of the unborn, to be protected... and the rights of women to have say over their own bodies.... are too complex to be covered in one blog entry.

What I want to say is that Dottie Doyle did women (and therefore all human beings) a favor when she stood up for us in that dark time. A time before we had the right to say no to a pregnancy, even in special circumstances. Dottie took the fall for what she did. (So did her family.)

Despite her ordeal, as far as I can tell, Dottie did not make the cover of Ms. Magazine. But I know... Dottie is a REAL Feminist! And I want to thank her for what she did!
Posted by Stray Yellar Dawg? at 7:05 AM