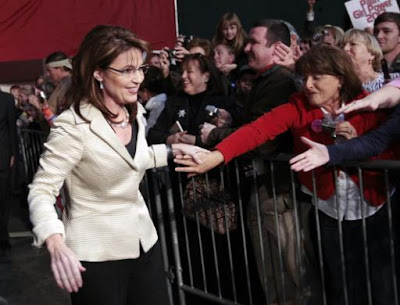 So says THE OBSERVER

"The latest bit of evidence came on Monday - two days after Mrs. Palin once again worked her way into national political headlines by jetting across the country to attend the annual Alfalfa Club dinner, a marquee event on the D.C. social calendar where the attendees included President Barack Obama - with the release of a Rasmussen Poll that found Republicans, by a better than two-to-one margin, want their party to be like Mrs. Palin and not her old running-mate, John McCain.

To brand Mrs. Palin the front-runner for the '12 nomination, as opposed to calling her one of several top-tier contenders, isn't a stretch at all."

The article goes on to assert some things I simply do not agree with.

Let's just say.... the author (Kornacki) engages in some "wishful thinking" about how Sarah Palin signals the shrinking, and impending demise of her party.

And let's also just say... judging from the membership rolls at TEAM SARAH and SARAHPAC *I don't think sooooooooo!*

Yes, it's her party now. And she'll cry if she wants to. Cry laughing, that is .... at fools like Kornacki.
Posted by Stray Yellar Dawg? at 5:56 AM