Two AM Musings on Sleep and Puppies 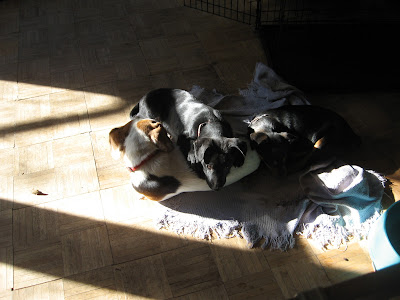 It's one of those early mornings. The new pups have worms and diarrhea, poor things. They slept for about five hours this first night... before they awoke me with a mess. Sigh.

To be honest, I have missed the wake ups at wee hours that signal "puppies in the house!" I think it must be the mother in me. And my fond memories of midnight wakings, nursings and rockings. Oh, sure, I complain. Just like anybody would. But, deep inside I know that life is best in the hours between dusk and dawn. Peaceful. Not without noise, but peaceful.

I am still of the belief that human beings do best if they get to bed early and rise with the dawn. Partly because I was raised on the old adage "early to bed, early to rise, makes a man healthy, wealthy and wise." And it was true in the case of them that raised me. But, I accepted the wisdom more deeply when I taught childbirth classes. In the early nineties I stumbled upon some decent research that associated post-partum depression with late evenings. I used to tell the men in my classes about that. And I'd encourage them to take the evening shift with the new babe, so new moms could go to bed after dinner. Then... mom could take the early AM shift. And everybody gets *some* sleep.

I can't even begin to tell you how many couples came back to thank me for that advice!

I'ts still true for me as well, years after having a human baby in the house. I know that irritability and "depression" set in if I have too many late evenings in a row. I put "depression" in quotes here, because I am not referring to *major depression* .... which cannot be abated by an early bedtime. Rather I refer to fleeting depression. The kind of melancholy that slows the impulses and makes me not want to do my work, or eat right, or exercise. That kind of "depression" can lead to *major depression* for sure. (If seratonin uptake remains high for a long time, it becomes a vicious cycle. Which likely explains why certain depressions can be staved off by something as simple as enough sleep at the right time of day. It balances seratonin and melatonin levels.)

Anyways... I'm listening to the swishing of the washing machine behind the "peace" playlist on my kitchen i-pod. Sheila Chandra soothes my headache. I make a list of "to dos" for the day..... Two pups to the vet at eight. One cat returns at nine. Return car at ten. Walk Jaclyn at noon. Read four more chapters at two. Water workout at four. Show Harper at seven. Do a few more laundry loads in between. And some dishes. Try to stay on my Weight Watcher diet. Drop in bed by nine.

That about sums it up.