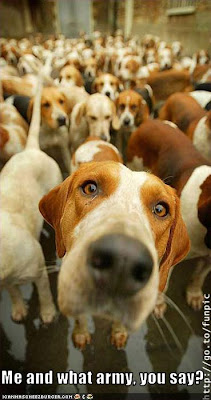 Feminists, or should I say women, have a habit of second guessing themselves. That has been my experience in these 50 years of life. I don't think it's an exaggeration, or a stereotype. I think the tendency sprouts from our cultural upbringing. We are taught, early on, that we should be careful to consider the feelings of others.

I was not surprised, really, to see many of my PUMA friends "reconsidering" yesterday. After all, it was Candlemas, or Imbolg, or Groundhog Day depending on your orientation. This is the season when our hibernating, winter selves re-emerge victorious. We have made it through another long winter! Now we can just hang on 'til spring. And, we can survive six more weeks of ANYTHING. Right?

One of my PUMA friends, Betty Jean at Free Me Now, woke up to the new day and proclaimed "We don't need a New Agenda." She called for a return to, and Democratic takeover of N.O.W. It's an interesting take on how to move forward. But it's not a view I share. Mainly because I see the National Organization for Women as overly beholden to one political party. And far too aligned with just one women's right issue: abortion.

Riverdaughterat The Confluence has another take on the situation. She is looking for the new leaders of the Feminist Movement. She names a few in this paragraph:

"As far as I’m concerned, feminists HAVE no leaders. We have a few promising ones emerging, like Amy Siskind of The New Agenda and Heidi Li Feldman of 51%. And we have some very talented writers like our own madamab, Reclusive Leftist’s Violet Socks** and action powerhouse Darragh Murphy of PUMAPac. We’re out here and we are keeping things together. Had I known about this conference, I might have gone down there myself to give the a leaders piece of my mind and a dope slap or two. Leaders LEAD. They don’t ask for someone to pass the Kool-ade.

Snap out of it, women. Four years is a long time."

I would simply add that Riverdaughter herself should be added to that list! And, I think she is right on. In another decade, or two, the words of Heidi Li, Violet Socks, and Amy Siskind will be studied in our universities whenever the career and presidential candidacy of Hillary Clinton is studied. (Which will be quite incessantly in Women's Studies programs. Sooner than we think. And I dare say, N.O.W. will be assessed as having come down on the wrong side of the battle for women's equality.)

The turnaround time for recognizing authors is generally shorter than the turnaround for changing family attitudes. So, YES! PUMAs must keep writing!! Don't ever let them silence you!!! And for those of us who do not write quite as well or proliferatively .... keep linking and circulating the blogs of your sisters. This is more critical now than it was when Hillary was still in the race. We want more, and more PUMAs to be recognized at the forefront of Feminist bloggery.

Perhaps the strongest essay to emerge at the end of our PUMA winter gestation was this one by Anna Belle. It was published, first in her own blog. And then quickly made it over to the New Agenda (linked here.) Anna Belle cuts through all the second guessing about our recent herstory. She takes us back to the core of herstorical Feminism. In so doing, she helps us to recognize what happened this past year.

This division we experienced.... the animosity between those favoring racial or gender emancipation.... how it played out in the presidential election, and particularly in the Democratic primaries .... was *nothing new*. PUMAs, as Feminists, can stand squarely upon the shoulders of Susan B. Anthony, and Elizabeth Cady Stanton. Knowing how the early suffragists handled themselves does me a world of good. It helps me know that, I am not a "racist" just because I favor women's progress.

So now I propose that we are NOT lost! We do not *need* N.O.W. to show us the way. Until (if) N.O.W.'s leadership re-examines, and gets it's head on straight about representing *all women* they can die a slow death as far as I am concerned. N.O.W., as it exists today, is obsolete. So is Ms. Magazine for that matter.

That being said, though, we do not suffer a lack of leadership! We are, in fact, standing on the shoulders of some very clear-headed ones, if we but study herstory. And we are holding hands with some visionary ones, if we but open our eyes and get beyond partisan enmeshment.

Our "New Agenda" is doing just that!

Yet another reason why a return to N.O.W. is unfeasible can be explored at Reclusive Leftist.
Posted by Stray Yellar Dawg? at 4:52 AM