After some highly inappropriate behavior on the part of CNN reporter, Susan Roesgen, that has resulted in a call for her firing.

Good ol' CNN is, this morning, reporting on a "family feud" in Alaska. It is on the CNN Cover Page and links to this story about the Palins.

I don't have to spell out the reason for this kind of language, do I? We all know what kinds of images "family feud" brings to mind. The derogatory term on the CNN home page, conjures memories of the Hatfields and McCoys, is another way of saying "Hillbillies." (It is worth noting that "family feud" is not actually used in the article, an article that is ridiculous enough all by itself.)

Is CNN deliberately stoking a race war? The class war they were hoping for has been an epic fail.... so now is the implicit meme "Hillbillies against the rest of the nation?" What this station is doing, at the bidding of who knows who, appears to be unethical and dangerous.

Why is the DHS not concerned about the behavior of CNN? If Janet Napolitano is alerting on "Right Wing Extremist Groups" why doesn't she care about the reporters at CNN who are clearly attempting to antagonize and incite such groups?

"Common Dreams" is apparently in on the act as well. I just received this from them, with a request for a donation: 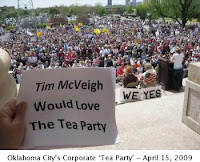 I told them to quit inciting hate, and remove me from their e-mail list immediately.
Posted by Stray Yellar Dawg? at 7:36 AM