The Lefty Blogosphere Begins to Wake Up About Sexism (Well, Sort Of.) 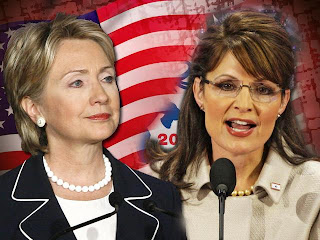 I realize it will be a slow, tedious process. And we won't likely get any real concessions about the matter until Sarah Palin is safely packed away and discredited as a future presidential candidate. But it does appear that the Lefty Blogosphere is beginning to awaken to the part that it's members played in the blatantly misogynist, sexist coup of 2008.

It is of no consolation to me that our, perhaps, number one women's ally in the world, Hillary Rodham Clinton, has been effectively silenced. As she spouts Obama policy, and tries to play nicey nice with his breast groping, frat boy administration.

"By all accounts, Mrs. Clinton has worked hard to be a good soldier in an administration run by the man she spent much of last year trying to defeat."

Indeed she has. And, I'll just say, it is a little more than concerning to hear her parroting catch-phrases like "Moderate Taliban." That one will come back to haunt Ms. Clinton, I'm afraid. But, worse... it demonstrates the degree to which Mr. Obama's fantastical ideas about militant Islam are pickling the brains of formerly intelligent and reasonable statespeople.

A scary situation, to be sure.

I guess what I can take away from all this is.... the Lefty Bloggers I used to respect, but came to disdain, are "waking up to sexism in the primaries" just as their Candidate's Secretary of State has decided to sip some of the kool-ade they are so intoxicated with.

But they won't be waking up to the sexism in the general election any time soon. Because Mrs. Palin won't be tipping the glass, so to speak.

She has no reason to.
Posted by Stray Yellar Dawg? at 6:11 AM