Speaking as a (Retired) Midwife Now: Archeologists are Lying Their Pants Off. 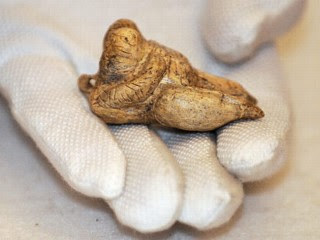 In response to The Reclusive Leftist:

When observing these prehistoric “figurines” of both female and male form…. If one wants to believe they are “pornographic” … the ridiculous implication is that men “get off” better via their imaginations (ie. looking at a female form.) While women have easier orgasms if the stimulus is a “tool” that is divorced from context. Modern science would suggest that nothing could be further from the truth. Studies of human sexuality show that the opposite is actually true.

If archeologists were working within a matrio-centric framework we’d finally get the truth… that God was once a woman and therefore, not allowed to be represented by anything less than wholeness. (Feet and head not required for creation. Vulva and breasts are.) OTOH... only the Lingham is required of the male god. (For that matter... forget the Lingham... even "The Word" he speaks is enough to impregnate Her form. No appendage required!)

At the very least, a serious scientific explanation should posit that a Goddess amulet of the sort shown here was likely carried as a fertility charm. This is not "rocket science" (pun intended.) Women still do this sort of thing and there is ample evidence of it, the world over.

I give up on the “science” of archeology. Really I do. These man centered interpretations are patently idiotic. I simply can’t abide that such “scientists” have any grasp on the truth whatsoever. Either they are clueless or they are deliberately lying to us.

I guess that begs the question....

Can anybody with an advanced degree be THAT stupid???
Posted by Stray Yellar Dawg? at 5:28 AM

Email ThisBlogThis!Share to TwitterShare to FacebookShare to Pinterest
Labels: Fertility Amulets, Futile Patriarchal Arguments, When God Was a Woman