Women I Will, And Women I Can't, Defend (And Why.) 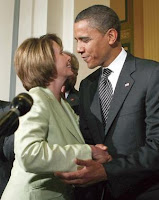 I love "The New Agenda." A bi-partisan group that defends women against the sexist onslaught of the MSM is just what we need. The group is on my list of PUMA bloggers that I must donate to.

That said... I have to admit... I don't have as much energy as some of the members do, to defend ALL women. I'm sorry if this is a divergent viewpoint. But I really must triage.

It's not that I think "Pelosi Galore" was a good idea. Or that TNA needs to "get a life" rather than raise hell about it. I am, in fact, happy that there are women who will defend Speaker Pelosi against sexist attacks. All I am saying is ... for right now, I'm not one of them.

Look. I live a life of dedication to causes. I run a pet rescue. I volunteer at a hospice. Before I did these things I was a mother/baby nurse and midwife.

I believe in birth, life, and death with dignity. For all beings. Those are my highest priorities. Principles that guide my Feminism. Birthing and deathing are predominantly the domains of women. They always have been. In this culture. And in many others. (What happens in between, tends to be controlled by men. That's how it is.)

So... where does that bring me in the matter of defending women pols?

I'll defend, to the bloody end, any woman who will stand up for the cause of dignity for all. Hillary Clinton, Sarah Palin and Sonia Sotomayor are in that category as far as I am concerned. So, you see... right now, on the national (and international) level, I have a pretty full plate. I am also reserving some energy for Ohio's local women candidates in 2010. (And I'm ashamed to say I don't even know who I may be working for yet.)

Nancy Pelosi has betrayed me. She backstabbed the best Presidential candidate ever. (One who just happened to be a woman.) Plus, Nan is not in my state. I don't have to be concerned about voting for her. Ever!

So... here's my deal. I will support The New Agenda in speaking out against sexism. Where ever it may happen. And to whomever. BUT..... that is as far as I will go.

Speaker Pelosi and her beloved abusers are of little concern to me.