Another Repressed Rightie, Poking His Appendages Where They Don't Belong, Bites the Proverbial Dust

Professor Darren Hutchinson has a series of posts about the weekend disappearance of The "Honorable" Mark Sanford, at Dissenting Justice.

Honestly, I was so hoping to hear that Governor Sanford's disappearance was for something exciting. Like he went to Argentina to study their Social security program.

Alas, it's the same old same. Repressed RWers, poking their appendages into bedrooms where they shouldn't be...

It really is time to get the government out of our bedrooms... and our churches. And vice-versa. (And the very beneficial side effect may be that we will get out of our politicians' personal business as well.)

Let's defend the constitution and leave it alone. Let the church decided who can marry. Let the state handle how to get us all health care....

Sanford, and his kind, have more pressing issues to attend to... I guess. His hypocrisy smacks of elitism.

On the bright side, however, that is one less competitor for the 2012 GOP Presidential Candidate. And Sarah Palin moves closer to the top of the heap. The ethics complaint brigade is still at it in Alaska, but... doncha know.... they can't seem to find anything that sticks:

Meanwhile, after it's weekend webathon, the Alaska Fund Trust is reporting that it is one quarter of the way toward paying off Palin's legal debts. 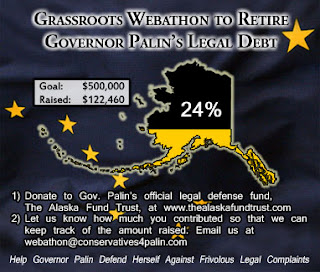 UPDATE: Thanks for the tip about the laughing women at the presser, Egalia. I will have to watch the danged video now. Eeewwwwwww.....

No Quarter is reporting that ...

"it has gotten worse with The State printing a whole bunch of emails sent between Sanford and his paramour. Emails that they have had in their possession for FIVE MONTHS. That’s kind of curious, isn’t it? They claim they were trying to “authenticate” them. Amazingly, they seemed to have done that in just a few days. Huh - that’s not the least bit coincidental, is it? Ahem."

Can you EVEN imagine what would have happened if this was Gov. Sarah Palin... running off to South America with a paramour? While Todd tended the kids back in AK??

OMG! It would be everywhere. All over the media.... til we all threw up from it.

And no one would be trying to "authenticate" anything. That is for sure. Hell, they'd not only NOT try to authenticate it. They'd be embellishing it night and day...

UPDATE #3: It gets worse... apparently John Kerry wishes it WAS Gov. Sarah Palin that went missing.

Yes it is too bad, Senator Kerry. Too bad for you and your cronies, that is.
Posted by Stray Yellar Dawg? at 5:38 AM

Email ThisBlogThis!Share to TwitterShare to FacebookShare to Pinterest
Labels: Church and State, Get Out of My Bedroom, Mark Sanford, RW hypocrisy