Enough of the "Hormones" Already! Let's Have Some Predictability in Government!! 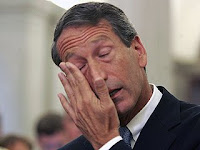 The question of the day comes from PUMA for Life: Are "Menopausal" Men Fit To Hold Office?

Of course, men don't really have menopause, or menarche or menses. But they still have hormone shifts as they age. And on a daily basis for that matter. As their testosterone levels rise, and then drop off ... according to diurnal and life cycles... can they be trusted to make weighty decisions?

Some time back, I argued that we have enough of these kinds of hormones on the bench already. Now I'd like to extend the argument to include the Senate, the House and State Governorships.

The fact is.... women are safer, where hormonal fluctuations are concerned. For any number of reasons. First of all... the average age of menarche is quite early these days. Some researchers suggest it's as early as *nine* years of age. By the time most young women enter high school, therefore, they have already learned how to deal with their periods.

Puberty for young men hits much later. Usually while they are *entering high school.* Being in high school means that they are too busy to devote the necessary time to, you know, "mapping one's cycles." Men never learn important lessons like "at this time of the month, I should refrain from selling the kids." (Or.... running off to Argentina....)

A second point that can be made about the safer nature of female hormones is, menopause tends to happen later in life, and be less protracted, than it's male counterpart... the "mid-life crisis." Plus... there are *drugs* women can take for a few years, to keep them from having hot flashes during an important Senate hearing or something.

Men don't have those kinds of luxuries. They can be having a "mid-life crisis" for years. Some of them even have serial "crises." And there's not one dang thing they can do about 'em. Except ask God's forgiveness AFTER THE FACT. Ask 'em. They'll all tell you the exact same story.... "I am soooo sorry for what I did to my wife and kids, I just couldn't help it...."

One final point I'd like to make is this. Even *if* a woman does have a runaway surge of estrogen or progesterone during a congressional session .... no harm done! Her milk will let down, and her shirt will get wet, and she'll approve something like CHIP, because she is thinking about how other women's babies deserve the same medical care her's can get.

BUT... whoa to the universe if a man is sitting at in front of "The Button" when he has a surge of testosterone.