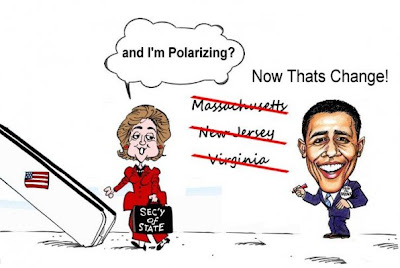 Lynn Forester-de-Rothschild nails it with this piece, linked at The New Agenda. Anybody in their right mind knows that this is not about Martha being a "bad candidate." Or running a "bad campaign."

We now get a glimpse of *why* Martha stood for Hillary til the bloody end of the 2008 primaries. The genius of knowing her own constituants... and what they would back in the long run. Martha surely saw the huge losses coming for her party under Obama. Even in Bluest of Blue, Massachusetts.

But she tried anyway. For that I give her credit.

I hope she keeps trying, too. Just like Hillary.

Personally, I place this loss squarely on the shoulders of the man whose seat Brown will be taking. Ted Kennedy. And his buddy John Kerry. They knew who their constituants wanted at the top of the Dem ticket in 2008. But they backed the empty suit anyway. Eff you, Teddy and Johnny. Eff you both. And your little boiz club too.