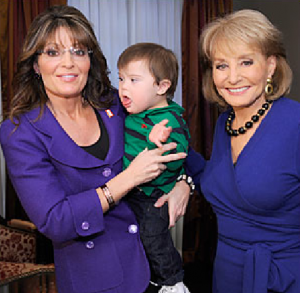 Thanks to Sarah Palin for honoring her soldier son by wearing his name on her wrist.

And thanks to my Leftie (former) comrades, for help with getting the word out about a small business trying to survive in a DOOMED economy:

There are plenty more links to the misogynist moron brigade at Legal Insurrection so, check 'em out! Even Kos is claiming to be concerned about the "norms of military families." Boohoo.

Statement from the company that made Sarah's bronze deployed hero bracelet:

"In some recent photo’s of Sarah Palin, we noticed she’s wearing her Deployed HeroBracelet bearing her son’s name, Track Paliin. Track is serving in the Middle East right now.

Back in 2008, we had heard that both Sarah Palin’s son and now Vice President Joseph Biden’s son were heading off on deployements, so we made them both a set of Deployed HeroBracelets with their son’s names on the bracelets. Our way for thanking them both for having son’s in the military. We actually got a very nice call from Senator Biden’s office, thanking us for the HeroBracelets. And now we’re quite proud to see Sarah Palin wearing her HeroBracelet."


Let me tell ya, it is increasingly embarrassing to admit I was ever a Democrat. WTF has happened to my party? Is there no one left with a shred of sanity, or respect?

As a mother, I am appalled that anyone would question a mother's right to honor the son she misses... in whatever way she sees fit.
Posted by Stray Yellar Dawg? at 6:13 AM