Excommunicated From The Pedophile Factory, Because She Saved a Life? Go Figure... 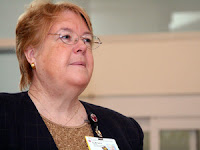 In a bizarre twist of logic, Sr. Margaret McBride has been excommunicated from the Catholic Church for allowing an abortion to take place on her watch at a Catholic hospital.

Never mind that the mother's life was in jeopardy. In fact... "According to a hospital document, she had "right heart failure," and her doctors told her that if she continued with the pregnancy, her risk of mortality was "close to 100 percent.""

Further, the woman who was saved by the emergency procedure has four other children at home to care for.

I am appalled. And made painfully aware of the reasons I was forced to leave the church of my upbringing.

Stick to your guns, Sister! You have done nothing wrong and the whole world knows it!! You are my hero!! I only hope the Sisters of Mercy, for whom I have profound respect, stand by you.
Posted by Stray Yellar Dawg? at 5:27 AM