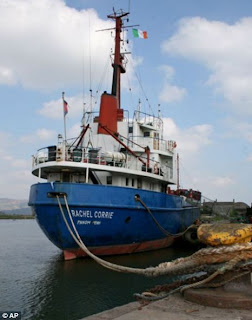 Was reading Larry Johnson's deft analysis of the Gaza situation this morning. And responded thusly:

Found this blog by an American in Gaza....
Gaza Dispatches.

Kind of gets at the complexity of the situation.

I agree with Larry, that Israel is losing the global PR battle. And I am not exactly sure why. I don't see them as "bullies." But many do.

I will say, from observing my own kids, the Ivy Elite are decidedly anti-Israel at this time. So... here we come upon a new generation of graduates from these esteemed institutions who are indoctrinated about the "evils of Israel." That, in itself, goes a long way toward their losing the PR battle. In the U.S. at least.

The problem that I perceive is... when you indoctrinate a generation *against* something or someone ... and you don't indoctrinate them "for" something, a vacuum forms. Those same kids who "hate Israel" now seem to think Hamas and Hezbollah are just hunky dory. And that is SCARY AS SH**.

There was a time, not long ago, when I was open to the pro-Palestine rhetoric surrounding the Rachel Corrie murder. I believed what I was hearing from the Harvard and Berkeley crowds. I, personally, began to side AGAINST Israel. BUT.... I started looking at the inevitable dilemna... if I am not siding with Israel, who would I be siding with?? Hamas? Hezbollah? Other Islamofacists in the Gaza region?

Fact is, there are no real sides to take in this matter. It is Israel against whom? Tribal terrorists who, in the wake of Israel's withdrawal from the region would turn on each other?? "Son of Hamas," Mosab Hassan Yousef, elaborates on the problem well. Read what he has to say ... and ...

Whose "side" can we take? Other than the people of Gaza's? And how on earth will we, in our ivy covered towers, know what is "best" for them??

H/T to Legal Insurrection for the video. And the well made point that not all Jews are white. Nor do all Jewish families hail from Poland and Germany. (As Helen Thomas seemed to believe during her little outburst.)
Posted by Stray Yellar Dawg? at 6:49 AM