I agree more with Anna Belle than I do with Jezebel, but both pen deft analyses of how the Left is losing the "Progressive" PR war. 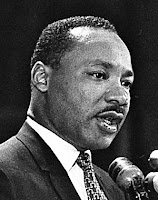 Jezebel's analysis of how the Left is losing Feminists is here: in the NYT.

Of course, NYT's editors want to believe the understory to Jezebel's piece. Namely, that Conservative women have no claim to Feminism. So she gets a primo spot in their opinion section.

But Anna Belle is actually more spot on, as she queries:

"When is the left going to realize that these heroes of America’s past belong to all Americans, that they are not the comfort toys of the left, which is how they treat them when they say that some Americans can’t appreciate them? "

I mean... shouldn't we want ALL Americans to celebrate the lives of Martin Luther King and Susan B. Anthony? Do we really want (more of Anna Belle's words here)

King (to be) like a Dora doll for the Sharpton marchers; (or ) like a dead and honored American by Beck and his ralliers, who paid no mind to the reactionary march Sharpton scheduled only after Beck’s rally was scheduled. Isn’t it worth asking during all this why Sharpton and other civil rights leaders didn’t see fit to honor King’s memory with an event of their own this year just because King was worth it, rather than reacting to a bunch of Americans who want to exercise their rights as well?

Seems to me this is the same kind of question we should be asking about Anthony. Do we really want her to be a "Dora doll" for certain kinds of Feminists? (Many of whom cannot be bothered to read her works, because they might collide with their own ideas about what Feminism should look like.) Do we want the likes of Susan B. reduced to a caricature of the complex individual that once chided: 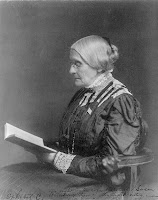 "Just Tell Them I have worked 40 years to make the Women's Suffrage platform broad enough for Atheists and Agnostics to stand upon, and now if need be I will fight the next 40 to keep it Catholic enough to permit the straightest Orthodox religionist to speak or pray and count her beads upon."

I'm getting the same eerily creepy feeling, from some of my friends and family on the Left, about the issues we face in regards to Islam in America. The questions are complex enough that I do not want to jump on the anti-GZ mosque or pro-GZ mosque bandwagons. I want to take my time and read ALL sides. To make my own decision, thank you.

But, any time I talk about the writings of Ayaan Hirsi Ali or Phyllis Chesler, I get the "Oh, they are *Conservatives*" eye roll. As if that somehow negates their first hand experiences and Feminist interpretations? WTF???

I mean, doesn't anybody care about the TRUTH any more? Is everything a political game to these folks that I used to support and vote for?
Posted by Stray Yellar Dawg? at 9:57 AM