Public TV Not So "Public" Anymore: PBS Loses It's Way 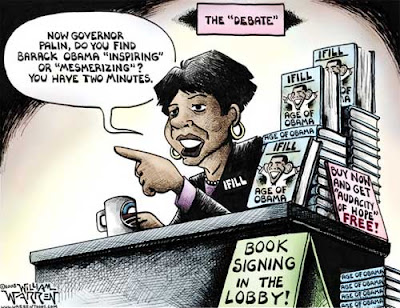 As reported by "Fairness in Reporting."

"public television" features guestlists strongly dominated by white, male and elite sources, who are far more likely to represent corporations and war makers than environmentalists or peace advocates. And both funding and ownership of these shows is increasingly corporate, further eroding the distinction between "public" and corporate television. There is precious little "public" left in "public television."

Add this little revelation to the fact that Gwen Ifill has jumped into the fray, criticizing Sarah Palin for *knowing* that the Boston Tea Party happened in 1773.

I sit here shaking my head. Because I was once a HUGE fan of PBS. In the 80's and 90s I relied heavily on McNeil-Lehrer and McLaughlin, to keep me up to date on what was happening in Washington. My kids literally cut their teeth watching these programs every Friday evening. Then my husband and I would talk to them about the issues. We took them to meet Mort Kondracke "in person" once. (Have his autograph to prove it.) We adored Eleanor Clift. Admired them all. Told the kids public journalism was important. Noble, even. Warned them about the dangers inherent in relying on commercial reporting.

In 2008 I *tried* to go back to PBS. For old times sake, I guess. But, I was gravely disappointed. Ifill was everywhere with her obvious Obama swooning. Eleanor (bless her heart) even became an Obama mouthpiece after the DNC gave Hillary's delegates to him. I was aghast when the McCain camp decided that Ifill could moderate the debate between Palin and Biden. (Gwen did her party bosses proud, too. And that is when I swore off PBS "news.")

What has happened to independent journalism in this country?

Oh, and... why the heck does WAPO have to caution it's "journalists" not to bicker with their readers on Twitter? Shouldn't they know that already? Did they skip college or something?? (Disclaimer: Mr. Greenslade draws the wrong conclusion here, IMO. But this is the only reference I can find to the WAPO warning.)
Posted by Stray Yellar Dawg? at 6:41 AM