Our Straw Government, Obama is No Lincoln 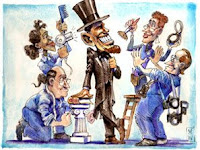 One of my favorite presidential historians, Sean Wilentz, is quoted in THIS POLITICO ARTICLE.

It's about the hubris of president elect Obama, and his likening himself to Abraham Lincoln. To be honest... I find this analogy offensive. Why? It's the brazenness of Mr. Obama who has, let's face it, accomplished so little in his career thus far.... except to lure the press into complacency and adulation.

As Wilentz is quoted saying "many presidents have sought to frame themselves in the historical legacies of illustrious predecessors, but he couldn't find any examples quite so brazen."

And more from Wilentz (who is an unabashed Clinton fan) "Lincoln is also a convenient political symbol for Obama to wield because Americans of all ideological stripes can find something to admire in him."

"He's a hero with a thousand heroisms," Wilentz wrote in an email, suggesting that Obama was intentionally "blending his own image with the only president (apart from Washington, who lacks lovability) who has attained sainthood."

Thus, Wilentz said, Obama "keeps flexible yet gets canonized before he's even sworn in. An amazing political feat."

I am sorry for my country. That it buys into this kind of illusory self aggrandization. We could have had either of two incredibly accomplished pols at the helm, Hillary Clinton or John McCain. Instead we get a caricature of Abe Lincoln. And not even a very good one at that.

Meanwhile Just 11% of Americans are willing to give Mr. Obama an absolute pass on the corruption in the IL legislature.
Posted by Stray Yellar Dawg? at 6:59 AM