A Whole New Meaning for "Polarizing." It means "Woman in Politics." 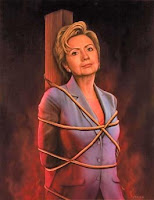 I have just now learned a new meaning for the word “polarizing.” It means "woman in politics". Hillary, as you recall, was “too polarizing” to suit the DNC. Now we find that Sarah is also “too polarizing” for the GOP, according to Gen. Powell.

Meanwhile, back at the ranch... John McCain scolds the GOP for whacking Obama. But says nothing about what Powell did to Sarah Palin.

Here we see that NYS is on to the McCain/Obama part of the equation. She considers it strange, as do I. (Apparently, Chicago corruption, and Obama's part in it is... in no way "polarizing" to the nation. Uh-uh. No.)

Several posters at TEAM SARAH, however, are not so convinced. They are calling for Mr. McCain to STFU about the their plans for the future. And to denounce Chicago corruption.

Powell's heresy against his own party, it seems, is just A-OK with Sen. McCain. Since it involves bashing a woman politician (ie. polarizer.) Never mind that she's the one who ran tirelessly by his side. It's ... wink, wink, Okey-Dokey to bash her.

But the GOP had better follow Powell's example and bow to "The One." Cuz Obama is a powerful he-man.

Nothing ever changes in dirty “Dicago” politics… does it? Boiz will, indeed, be boiz. And the ladies.... well, we're just their "polarizing" whipping posts. Til they need us.
Posted by Stray Yellar Dawg? at 7:19 AM