All White Senate Turns Away Only Black Member 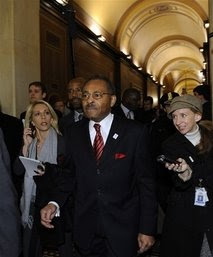 Roland Burris was denied entry to the hallowed halls of the United States Senate today. He would have been the only black man sworn in this session, the 111th. It was striking to observe his rejection. No matter what reason was given, what technicality was cited, what political tale was spun... the image was what it was. A seventy-one year old, African American, lifelong public servant was denied entrance to an all white "old boys" club. (There are women in this old boys club. But not nearly enough to represent the 51% comprising their American constituants.) 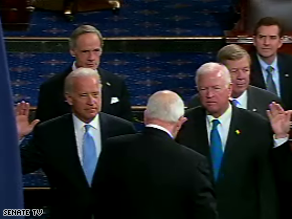 Burris' statement sent cold chills up the spines of many who recognized the historical significance of what we were witnessing.

I guess we can be grateful that Mr. Burris was allowed to watch the swearing in ceremony from the balcony.

And we might take heart that Burris has been offered an office space wherein he can get out of the cold rain and await his fate.

All in all, though, it's a sad day on Capital Hill. Not only do progressives lose their champions, Hillary Rodham Rodham Clinton and Joseph Robinette Biden this year. They witness the turning back of an African American who is well qualified to replace Barack Hussein Obama.

This is just not something we should be seeing in the Democratic party.
Posted by Stray Yellar Dawg? at 2:44 PM