Diane Feinstein is NOT Obama's Sweetie! 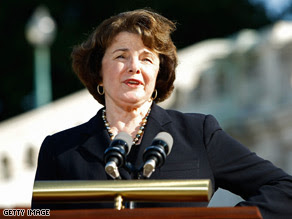 She seems a tad pithed at her new party leader, in fact.

And who can blame her?

"A Feinstein spokesman told CNN’s Dana Bash that the California senator found out about Obama’s pick after her staff showed her a New York Times report.

"The President-elect will now have a chance to make his arguments,” the spokesman said. “Her next move is to listen."

Feinstein is the new chairwoman of the Senate Select Committee on Intelligence. While Panetta’s political career — as a congressman, and as President Clinton’s chief of staff — spans three decades, he has little hands-on intelligence experience."

I would like to add that it is really quite something to see CNN reporting on ANY of this. And it shows that Obama's hijinx are starting to wear thin on even kool-ade mainliners like them.
Posted by Stray Yellar Dawg? at 3:20 PM