And Now, For a Hint of Good (Feminist) News: Meg to Replace Ah-nold? 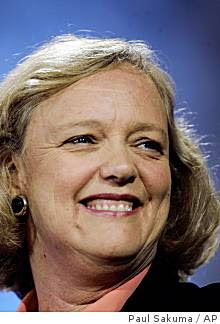 ""A person who is knowledgeable about Whitman's political aspirations told The Associated Press that the 52-year-old Silicon Valley leader is planning to run for governor. The person, who spoke on condition of anonymity because he was not authorized to speak about her future on the record, said Whitman's resignations are "a strong indication" that she wants to clear any commitments that might interfere with a run for political office.

She will make the announcement official in four to six weeks, he said.

Whitman is one of three Republicans who are considered front-runners in the 2010 California gubernatorial campaign.""