The Fourth Face In My "Real Feminism" Series Belongs to.... 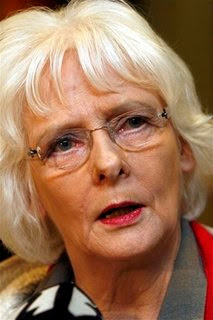 Not so much because SHE is a shining example of how women's rights, and gay rights, are really human rights. And not just because she is the first openly gay woman to be named head of state.

What is really remarkable in this situation is that the people of Iceland love and respect her. (Imagine that happening here in the United States!)

A few quotes from THE ASSOCIATED PRESS:

"polling company Capacent Gallup said Sigurdardottir was Iceland's most popular politician in November, with an approval rating of 73 percent.

She was the only minister to see her rating improve on the previous year's score, Capacent Gallup said Wednesday. The poll of 2,000 people had a margin of error of plus or minus 3 percent.

"It's a question of trust, people believe that she actually cares about people," said Olafur Hardarson, a political scientist at the University of Iceland.

Sigurdardottir is seen by many as a salve to the bubbling tensions in Iceland. Thousands have joined anti-government protests recently. Last week, police used tear gas for the first time in about 50 years to disperse crowds."

Brava to the people of Iceland! For recognizing TALENT to lead.... and not being bogged down in antiquated thinking about WHO can lead!

Thanks to TGW for the heads up on this fabulous news!

Iceland is among the world's HAPPIEST COUNTRIES. Now we know another reason why!

Don't miss Heidi Li's Excellent Essay about the false Feminist in the White House.
Posted by Stray Yellar Dawg? at 5:49 AM