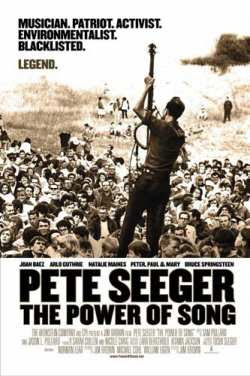 I just saw THIS FILM which I highly recommend.

While watching, I learned (and remembered) quite a bit ... about the history of the 50s and 60s. In those times, you may recall, the anti-war movement was censored. It gained great power as an underground movement. Because of people like Pete, and Joan Baez, and Arlo Guthrie. Quite unlike today, frankly, where "anti-war" has been co-opted by slick advertisers, with big budgets, to push forward their unsavory agendas and sell their "peace-wares."

I truly wish I knew a way that the young people of today could rise above all that. But, they seem so vulnerable to the propaganda spewn from television sets and radios. And, yes, I'll say it... from Youtube. ***Astroturf does not really equal grassroots. The gullible among us just think it does.*** << Click for video. Sigh.

Anyways... BIG SHOUT OUT to Pete Seeger! For walking the walk, long before he had anybody like Oprah, or Move-On, to finance his videos! Pete is part five in my "Real Feminist" series. A real American freedom fighter, who has given his life for us all.

In the words of Hillary Clinton, "Women's rights are human rights. And human rights are women's rights." Pete has fought the good fight! I think I can safely dub him "Feminist." At age 90, Pete is still a Unitarian, and an activist. And of course, a singer/ songwriter! He is still fighting for us.

Now that deserves a superman suit!

UPDATE: Uppity Woman notes HERE that only us peons are supposed to turn our heat down. Not "The One." And, probably not his rock star "spokespeople" in the astroturf video. A perfect example of the difference between grassroots, and astroturf. Pete woulda turned his heat down.... or gone without.
Posted by Stray Yellar Dawg? at 5:48 AM