Is Barack Obama Your President?

Sarah Palin speaks out in THIS INTERVIEW

She is eloquent, and insightful, when she says that neither race, class, nor gender should be an obstacle to promotion or election. Her support of the new First Family is unequivocal. (I wish mine could be moreso.)

I grow increasingly impressed with this woman from "across the aisle."

And, BTW, I wonder what happened to? 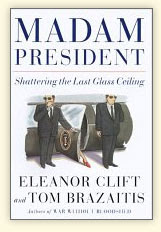 Was it canned when Hillary was run from the race? If so, that's a shame. Being a former fan of Clifts, I would likely have enjoyed reading it.

Here's what little description I could find:

"Imagine that it is the summer of 2008, and for the first time, one of the two major parties has nominated a woman for president. Polls show her running neck and neck with her male opponent, and political analysts agree that she has a real shot to win the election. Voters are impressed with her command of the issues and the way she stands up to the onslaught of questions about her private life . . . Pollsters predict the election will spark a voter realignment that will affect presidential races far into the future . . .

Oh... and YES, I agree with Clift and Brazaitis.

The 2008 election may very well have sparked a voter realignment that will affect presidential races far into the future.

Probably not the way they were envisioning it, though.
Posted by Stray Yellar Dawg? at 7:05 AM