Where I Stand on the "Conscience Clause"

It is on these grounds that some of us may choose to be Conscientious Objectors when a military draft is instated. My husband, for instance, was a C.O. during the Viet Nam war.

I want my government to honor Conscientious War Objectors.... and there is a process by which that can happen. You can read about the process HERE.

So, why can't we have a way to honor those who object to abortion as an act of conscience? A process, such as the C.O. designation? Why must we continue to divide ourselves over these kinds of issues?? Which are, in reality, non-issues.

Why do I say they are non-issues? Because, in my own experience as a mother/baby nurse for 27 years... I always had the right of conscience. Or at least I thought I did. No employer ever forced me to do things I felt were morally wrong. There was one time that I asked to be reassigned because of a LTA. And I often cajoled my way out of nursery duty where I would have to aid in cosmetic circumcisions.

Let us examine the issue more closely..... and agree that it is bad business for any company to hire workers that are opposed to what they do. A worker that cannot fulfill a job description is not usually hired. And if s/he is hired doesn't last long.

In essence, GWB's proposal will place undue burden on employers. Those employers will have to provide back-up personnel who will do what their C.O. population will not. That will add expense. And make the system unwieldy. On those grounds, I can see an argument for why the clause should be overturned.

But, I must admit... I am alarmed at my fellow "Liberals" and "Feminists" who are out in the blogosphere ranting about how every doctor, nurse, and pharmacist should be forced to mete out abortifacents. Frankly, I don't see how you can stand on that ground ... without also standing on the ground that says every able bodied man and woman should kill Iraqis. And, I know most of you would not say that.

Which brings me back to my original point. When I was actively practicing as a nurse, I was NEVER forced to go against my conscience. Not once. And I worked in many kinds of institutions.

I'll qualify this by saying that I am one of those complicated pro-choice and pro-life Feminists. I don't want abortion criminalized. I know what can happen when desperate women cannot obtain the help they need to control family size. Yet, I am opposed to LTAs. And I will not, as a nurse, participate in one. That's me. And that's my right. I no longer buy the "slippery slope" analogy. I believe in a middle ground. (As did Susan B. Anthony, herself a Unitarian.)

I now submit for your evaluation, evidence that this "conscience" issue has been on the table forever... and has led exactly nowhere: 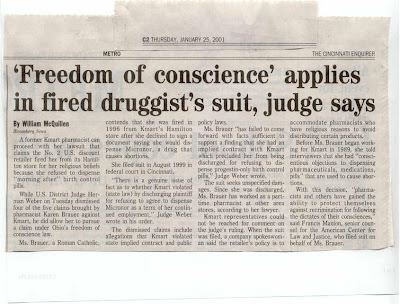 A few cases like the one in this article will be all that's required to overturn Bush's "Conscience Clause" as it stands. Because companies like K-mart are already buckling under the strain of our economic situation. And they don't need the additional burden of employee lawsuits. That makes GWB's last stroke of the pen a gift for the incoming Obama. Barack can now overturn the clause, claim it is harming the economy... and win brownie points with Feminist groups for doing essentially nothing. (Sound familiar?) Meanwhile, Bush gets brownie points from his pro-life crowd. And all the men are happy!

But, nothing is solved for us women.

We need to call for a way in which health care workers can seek asylum, and be allowed to "conscientiously object" to what they can't, in good conscience participate in. And at the same time employers need protection from having to hire folks who can't fulfill a job description.

Otherwise we'll be battling this out forever.
Posted by Stray Yellar Dawg? at 6:26 AM