The Unreformation of Welfare and Hillary's Tears (We didn't know what we had, now it's gone.) 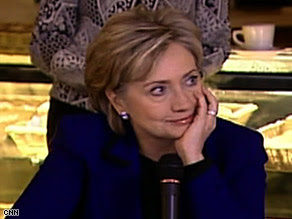 I realize that I may be taking a differing POV from some PUMAs. There are, after all, Dems who hated Clinton for his welfare reforms.

But, I was and still am a Clinton Dem. I was proud of Bill for finding a way to reign in welfare spending. I was proud of us Dems when Bill left the White House with a balanced budget.

I don't know for sure how Hillary would have handled this. But, I think her tact would have been different than Obama's.

I still believe the way out of excessive welfare rolls lies in universal health care. If we all had health care, then loss of a job would not have near the impact it does on families. And employers would not have to provide insurance.... so there would be more jobs. That is where I believe Hillary would have invested our money.

Paying the states to keep people on welfare is not good. Not good for the taxpayer OR the welfare recipient.

I remember Hillary crying and saying "I just don't want to see us fall backwards."

Well, now I am crying too.

On the bright side, though, by the time this is all over, Bill's Presidential Rating will climb another six notches. As historians begin to ponder what they have missed about the Clinton genius, and appreciate it.

No wonder they wanted Hillary as Secretary of State. They placed her as far from domestic policy as they could get her.... so they could turn back the clock and get away with it.

We were heading for paradise and ended up in this parking lot.
Posted by Stray Yellar Dawg? at 6:02 AM