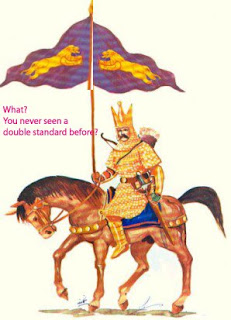 This morning I awake to two excellent editorial pieces from fellow PUMAs. Both pointing out the media bias ... nay, outright discrimination, against Sarah Palin.

First of all... the MSM seems to be just fine with how Bobby Jindal is flitting around the country, "trying out for president." I am sure the GOP is happy that he is being fairly well received. Still, I have to wonder... is PUMA for Life the only one calling attention to the double standard?

"Just wondering, because if that was Sarah Palin it would be all over the networks in the lower 48 and in Alaska that Palin is out campaigning at the state taxpayers expense (even if she was paying her own way; the truth might be whispered a month or so from now in the back pages of the local newspaper next to the obituaries); that Palin is only interested in herself, not the people of Alaska; that Palin sure has a big ego thinking she could actually be president since she has no foreign policy experience and comes from a remote state like Alaska."

Meanwhile, Spiral Gate's Willow is curious about why Michelle Obama's wardrobe is A-OK with the powers that rule the airwaves.

She asks us to recall the time when Me-Chelle told Jay Leno:

"We buy the clothes we wear."

And, to further make her point, she (said):

"I mean, especially a VP pick, it's like being shot out of a cannon ... All of a sudden, you are the center of attention. But our policy has always been whatever we wear, for us, we buy."

Tell that to Jason Wu and the other designers and jewelers who have given her freebies to wear, including a pair of diamond earrings valued at $17,313, and that inauguration gown. Even though Michelle's press secretary claims they paid for the clothes, an article in the New York times quotes the designers as saying they did not charge the Obamas."


I like the way PUMA for Life ends her little tirade, because I, too "wonder about the people of Alaska. Why are they not proud of their governor? I think that is very weird and if anyone from Alaska would like to explain I would love to hear it."

Thanks for asking, PUMA for life!

Thanks for asking, Willow.