Is Sebelius Merely a Cover for What's Happening to Health Care in the Senate? (What you don't know, might kill you.) 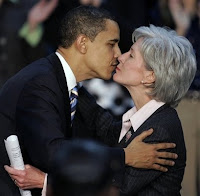 It's unlike them, really, but The New York Times let this little gem slip last week. Don't know how I missed it. Except I don't read that rag any more.... since it became the Obama Press and Lie Factory.

Having been made aware of the "secret Senate talks" though, things are starting to come together. THIS was the missing piece from the Sebelius appointment you see. And here's the clincher:

"Originally, Daschle was to hold both the position of HHS secretary and a top White House post directing the health reform effort. An administration official said Saturday the White House position will not go to Sebelius, but will be filled by another person."

You see ... Gov. Sebeilus, being a Governor and not a Senator, does not pal around with enough lobbyists to make her useful in directing the health care reform effort. Daschle was the king of the lobbyist buddy network. But... not to worry.... cuz there are other kings and princes on the senate floor right now. And they are somehow managing to escape all scrutiny.

From the NYT article:

"Many of the parties, from big insurance companies to lobbyists for consumers, doctors, hospitals and pharmaceutical companies, are embracing the idea that comprehensive health care legislation should include a requirement that every American carry insurance.

While not all industry groups are in complete agreement, there is enough of a consensus, according to people who have attended the meetings, that they have begun to tackle the next steps: how to enforce the requirement for everyone to have health insurance; how to make insurance affordable to the uninsured; and whether to require employers to help buy coverage for their employees.

The talks, which are taking place behind closed doors, are unusual. Lobbyists for a wide range of interest groups — some of which were involved in defeating national health legislation in 1993-4 — are meeting with the staff of Mr. Kennedy, Democrat of Massachusetts, in a search for common ground."

I would caution Liberals and Conservatives alike to be careful about putting too much focus on the Sebelius pick. Don't let your joy, or sorrow, avert your attention from what is really happening to health care in the Senate's back chambers.

If you do, you may wake up to quite a surprise!
Posted by Stray Yellar Dawg? at 6:44 AM