NYT and Howard Dean on Sarah Palin: Can I Throw Up Now? 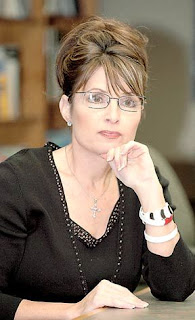 Apparently the New York Times is back in Alaska, preparing another hit piece on Sarah Palin. PUMA 4 Life covers it.

"NYT reporter Bill Yardly was in Juneau working on a story about how Sarah has changed as a governor since her VP race. That must be the reason we are hearing all of these ridiculous negative comments coming out of the mouths of Alaskan state legislators; they all must want their 30 seconds of fame, much like what young Levi and his family secured by telling nasty stories about an 18 year old girl and her mother.

There’s even this Republican named Jay Ramras busily making a jackass of himself. I thought it was a big joke when I read that Ramras asked Palin’s nominee for attorney general, Wayne Anthoney Ross, how, as attorney general, he would advise Palin if she gets a lucrative book deal requiring her to leave Alaska for an extended nationwide book tour. He said he wanted a legal opinion from the Department of Law on that."

Be sure to go to the link and read it all. It's delicious, in a "we're used to the bitter" sort of way.)

Not only is NYT up to it's Dirty tricks, though....

Look at how Howard Dean is trying to win "Liberal" women back to his sexist pig of a party. Not Your Sweetie covers the sickening sweetness there.

Can I just throw up now? All this bitter and sweet is bad for my digestion.

PS. What would I do without the REAL news I get from my PUMA blogger friends?

Addendum: More evidence that the Left wants us (women) back: CNN is stoking a McCain / Palin fued that does not exist.
Posted by Stray Yellar Dawg? at 7:01 AM