Grandpa Cheney Supports His Daughter: Comes Out In Favor of Gay Marriage! 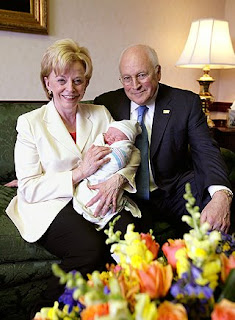 Yes it's true!! We can add to the growing chorus of GOP leaders that are calling for states to ratify gay marriage.... Former VP Dick Cheney.

""As many of you know, one of my daughters is gay and it is something we have lived with for a long time in our family," Cheney said Monday at the Gerald R. Ford Foundation journalism awards at the National Press Club.

"I think people ought to be free to enter into any kind of union they wish. Any kind of arrangement they wish," the former vice president said, according to the the Huffington Post reported.

The pro-gay marriage stance isn't new for Cheney, who during his 2004 campaign with former President George W. Bush made a nearly word-for-word declaration that all types of relationships should be acceptable.

The timing, however, makes his latest speech particularly significant -- it comes just after California's top court refused to overturn the Proposition 8 ban on gay marriage and as the GOP continues to remain split over the issue. John McCain's campaign manager Steve Schmidt and Bush recount lawyer Ted Olsen have both publicly argued in support of gay marriage...""

I guess I should now confess.... and I know it is SHOCKING .... I, Stray Yellar Dawg, have joined the Log Cabin Republicans. I'm still not a registered Republican. But, I am an Independent that is inching closer and closer to the party pf my Granddad. Because, I am starting to like what I am hearing! Couple that with the fact that I do not like what the Obamacratic party did to gays in California... by not speaking out against Prop H8.... and I think you can see where I am coming from.

To be clear: there *were* robo-calls made to California Democrats, encouraging them to vote against the proposition that killed marriage equality in their state. But... they were made by that *racist* Bill Clinton. Alas, common sense would tell us they did not do much to persuade the 95% of African American voters that turned out for Mr. Obama. 85% of those voters, Afrocity laments, voted FOR Prop H8.

She puts forth her opinion as to why, as well: "I’ve read the statistic that 85 percent of blacks voted in favor of Prop. 8 in order to defeat same-sex marriage. It occurs to me that black opposition to same-sex marriage is a safe expression of an intense and virulent anti-white racism because the majority of people who are openly lesbian or gay are white. I suspect this anti-white/anti-gay hatred — if I am correct and it exists and is widespread — is founded in Black Liberation Theology. But whatever foundation it has, homosexuals are the safe white people to hate and the minority that can safely be denied equality. No good is going to come of either of those things."

She is correct, no good can come of the way in which our political parties divide us, in order that we can't rise up. But "divide and conquer" works. And, at the end of the day.... the Democrats may find out that what they did to gay Californians worked a little too well for their liking. Cuz the Log Cabin Repubs are promising a fight. And they have the Governator behind them.