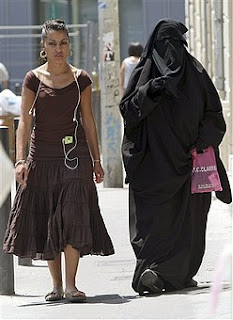 "French President Nicolas Sarkozy lashed out Monday at the practice of wearing the Muslim burqa, insisting the full-body religious gown is a sign of the "debasement" of women and that it won't be welcome in France."

"In our country, we cannot accept that women be prisoners behind a screen, cut off from all social life, deprived of all identity," Sarkozy said to extended applause in a speech at the Chateau of Versailles southwest of Paris.

"The burqa is not a religious sign, it's a sign of subservience, a sign of debasement - I want to say it solemnly," he said. "It will not be welcome on the territory of the French Republic."

Wow! Is it direct smackdown of Obama's "let them wear hijab" statement??

UPDATE: Phyllis Chesler weighs in on the Sarkozy vs. Obama statements.
Posted by Stray Yellar Dawg? at 12:23 PM