When is an Apology not an Apology? Dave's War on Working Women and Harriet Christian's Response. 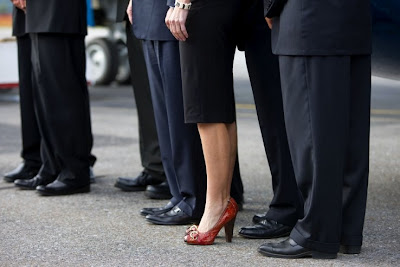 I read Jenn Q. Public's excellent rant at Afrocity's blog yesterday. It's profound. It even borders on "life changing." For a former "Liberal" like me, at least.

Honestly, folks. I never meant to look down upon my roots. I never planned to abandon the ideals of my small business owning grandparents, or my blue collar daddy. My wish for the party with which I affiliated myself was simple inclusiveness. I wanted to be part of the fight for civil rights. And worker rights. And women's rights. And gay rights. "The Big tent" as they say.

A not so funny thing happened while I was off fighting for the various and assundry rights that I still believe in, however. The people I was fighting to defend, turned on me. The party of my blue collar daddy was taken over by "the entitled ones." You know, like David Letterman:

What gives Dave Letterman license to repeatedly troll the gutter without ever dirtying his Worldwide Pants?

Didn’t you realize? He can’t be sexist, he’s a liberal. He’s no misogynist – he votes Democrat. Like all liberals, Dave will tell you he loves women. He respects them. Isn’t he pro-choice? Isn’t he sufficiently appalled by breast cancer? Doesn’t he joke all the time about those brutish southerners who beat their wives with Confederate flags? Haven’t you heard? He’s a card carrying liberal. Liberal, I tell you. Liberal!

Among his liberal buddies, Letterman can get away with pretending that he intended to insult Sarah Palin’s 18-year-old daughter Bristol, not her younger child Willow. But Willow was at the ballgame, Bristol was thousands of miles away, and Letterman is the skeevy guy in dress shoes and a tan trench coat who bares it all to a 14-year-old girl on the subway, then swears to the cops, “But I thought she was 18,” as he’s being hauled off to jail.

“Look at my record,” Dave told his audience as he clarified his remarks about Willow. What he means is he’s on record as being liberal. He knows the secret handshake and everything! And as we all know, liberal men are inherently sensitive to sexism in our society.

Yes. I admit it. Jenn Q. Public is talking about *me.* The old, unenlightened, me. The me that existed until I saw the brutal male supremacy unleashed on Hillary Rodham Clinton in 2008. At one time, I would have bought Dave's argument. With little skepticism. No more! Now I'm an outright cynic.

Just as is Laura at HotAir.

I’m going to have to respectfully disagree with Allahpundit that his Letterman quote includes an apology. It does not. It includes a post-modern faux apology: “sorry that you rubes misunderstood the joke, which I at least now admit wasn’t funny. To you. Obviously a good portion of my audience enjoyed it immensely and clearly understood it, especially when I non-apologized a couple of days ago. I’ll be more humble this time and see if it flies, so I don’t lose any more sponsors. As a responsible adult I want you to know I did take the time to check and see if that Palin kid was over 18 before I called her a tramp. Because that’s the kind of guy I am, and, again, it’s not your fault that it was misunderstood, it’s my fault. That it was misunderstood. The important thing is that unlike Imus, I’m a liberal who means well, so I deserve a pass for anything I say that is offensive.”

I don't like being cynical. Really I don't. But, Dave's condescension is glaring. It is really because they are stupid, ya know. Those working class sluts that serve cocktails on your two am flight home from Honolulu. They don't "get" Dave's jokes. They don't know the secret handshake, uh... er... fistbump.

Well here's some news for my former "Liberal" allies:

I know the secret handshake.

And Neither is PUMA, Harriet Christian....

PS. The idiot interviewing Harriet clearly does not know who she is. He believes she is a Conservative Republican.. and he tries to trip her up about RW talk's part in the Tiller murder. It's priceless to watch him make a fool of himself.
Posted by Stray Yellar Dawg? at 6:14 AM