The Nature of Evil, The Will to Take Action, and How New Age Thinking has Infiltrated the Right. (Day 8 in the Letterman Situation) 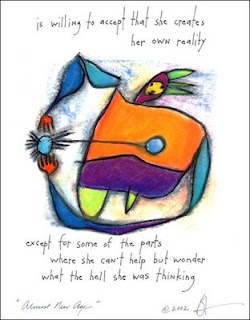 I have been having an interesting conversation with one "Kwakerjak" at Cynthia Yockey's blog. It has to do with why the Right Wing is so reticent to stand up for itself against jerks like Letterman.

To be honest, I was quite surprised to read Kwakerjak's take on a certain conservative principle.... that sounds an awful lot like New Age mumbo jumbo to me.

Here's how the conversation is progressing:

First off, Cynthia vows to get Dave fired. And Rick Moran asks where are the rest of the Cynthias? (That's a brief paraphrase, so go to the link and read it all!)

However, there is a problem that you seem to be running into, namely the utter abhorrence that most conservatives have for victimhood. To put it simply, it is widely held on this side of the political spectrum that thinking of oneself as a victim will always, always, always lead to profound unhappiness, because it means acknowledging that someone else is in control of some aspect of your life. This is considered to be true even if the person in question really is a victim—some might say especially so. Thus, in the eyes of many on the Right, you are doing the Palins a disservice by encouraging them to think of themselves as victims.

To which I respond:

Never give up. Never surrender. Sounds like Johnny Mac!

Just to be clear….

Standing up for a fourteen year old girl does not make one a “victim.” It makes one a hero! No matter what a few fanatics on the Right may say. (Hell, they sound a lot like a few LW, new age, ” create your own reality” whackos if that is what they really think.)

There is evil in the world. Pretending that it doesn’t exist won’t make it go away. That is the strategy of the Obots… and I dare say…. it’s not working so well in Iran or South Korea.

It won’t work on Letterman either.

It’s not “a few fanatics” on the Right that believe that, it’s a core principle of conservatism. People who believe that they are victims tend to think that they are entitled to something that someone else has denied them; as a result of this, there is a tendency to focus on forcing someone else to “make” you happy, rather than improving one’s own lot in life (because why should I improve my own life when it’s somebody else’s fault that I’m miserable?). It starts a cycle of dissatisfaction: when you neutralize one oppressor, there is a tendency to find another, then another, then another, until one becomes mired in an obsession with correcting every perceived slight, instead of focusing on what can actually bring real happiness (family, friendship, religion—basically, any social institution that encourages one to place the needs and desires of others over those of oneself).

So what do those on the Right do when they are victimized? They gripe about it for a while, and then return their focus to those social institutions that produce real happiness and satisfaction—which, not surprisingly, is exactly what most on the Right want to do. In other words, they don’t want David Letterman or his employers to be the one who decides if they’re happy with their life, because that means giving up autonomy.

I’m not saying that this should apply in this instance; what I’m saying is that you’re going to have to convince conservatives that this is more than just an attempt to enable the Palins to feel sorry for themselves (the fact that they obviously don’t feel that way should go a long way towards helping in this). Basically, what I’m saying is that you’ve got to convince conservatives that this is a valid exception to the otherwise ironclad “victimhood = bad” rule, because to most of them, that is not self-evident.

And I respond again:

That’s an important point, Kwaker. And I think you may be on to something.

But, fact is… the Palins are happy. At least from outer appearances. Letterman never affacted their “happiness” did he? No more than an Iranian coup is affecting mine. I have a life, a family…. a job. Just as Sarah does.

BUT… being “happy” (whatever that actually means… and yes I have a degree in Family Science so I am quite familiar with “happiness scales”) does not absolve one of the responsibility to do what is right.

That is a major blind spot in the New Age community, as far as I am concerned. And I find the possibility that half of the U.S. thinks that way (as you indicate) to be disturbing beyond belief.

What is this obsession that Americans have with being “happy?” Heroic actions aren’t born out of “happiness.” They are born out of discernment about what is right… and determination to make that happen.

Wow. When I decided to support Sarah, I had no idea the lame-brained nonsense I would find on the Right. I thought only the Leftie, New Agey, Kumbaya singing, O-bots believe that... as long as they are happy... it doesn't matter who rules Iran.... or what Letterman says about Willow Palin.

Geesh. The very idea that, as long as Sarah is "happy," who cares what Dave Letterman does to 14 year old girls totally toasts my titties!

So what do ya think, PUMAs and Palinites? Can we rise above this kind of wishful, nay magical, thinking and continue to fight??

PS. This post is really not about whether Letterman should be fired. Rather, it is about the path for decisive action in this, or any matter. In the case of Letterman (and Iran) I tend to agree with Senator McCain. Some battles are worth more of a fight than are others.

Our movement needs to be on the watch for ANY attack on the children of pols. Period! It's not about "happiness." It's about what is right.

PSS. (Disclaimer.) I have nothing against New Age thinking in general. I believe that thought creates... to a point. But, as with anything, there are limits. Willow Palin cannot protect herself from the likes of David Letterman by thinking positively, or trying to be "happy." Nor will Ahmadinajad become less of a tyrant because we "hope" for "change."
Posted by Stray Yellar Dawg? at 6:02 AM