"I will go around the country on behalf of candidates who believe in the right things, regardless of their party label or affiliation," 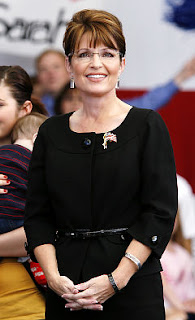 "I will go around the country on behalf of candidates who believe in the right things, regardless of their party label or affiliation," she said over lunch in her downtown office, 40 miles from her now-famous hometown of Wasilla — population 7,000 — where she began her political career.

"People are so tired of the partisan stuff — even my own son is not a Republican," said Mrs. Palin, who stunned the political world earlier this month with her decision to step down as governor July 26 with 18 months left in her term.

Very unusual sentiments for a Republican.