Obotian Tactics Not Working This Time, Old People Come Prepared. (Back to the Drawing Board on Universal Health Care. ) 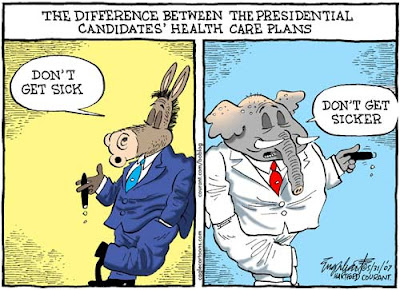 HILLBUZZ covers the story of AARP "leaders" walking out of their own "Health Care Town Halls." Apparently they do not like being questioned by their own, paying members?? Wow. Wonder how that's gonna affect membership?

As a health care professional ... I have to admit ... I am FOR Universal Health Care. I want emergency and catastrophic coverage for all U.S. citizens. I'd prefer a single payer system for "essential care services." I think it should be funded by the taxpayers. For our own sakes. (So that we don't have to pay with our own lack of essential services when we need them. And so that we don't have to deal with unnecessary exposure to poverty abetted illnesses.)

I also don't believe that I, as a nurse, should ever have to turn away a truly sick human being. Period. Illegal immigrant care has to be dealt with, but that is another subject... and it is not a ginormous problem where I live and work. So, I lack the necessary real time experience to comment on it. Except to say that, here in Cincinnati, homeowners vote for an "indigent care" levy that is designed for folks who fall through that kind of crack. Again, we do this for our own sakes, as well as for the poor. Most Conservatives (and yes, we are a Conservative town) don't want to step over sick people in gutters on the way to work. That's just the way we are... so sue us.

Over and above my belief in universal access to "Essential and Catastrophic" care, I think there should be free market "Wellness Care." Wherein any individual or company could choose to cover itself/ it's employees with more. More of what, you ask? Free market. You choose. Prescriptions? Massages? Chiropractic? Health Clubs? Sky's the limit!

All that being said ... there are, IMO, three strikes against what the White House is doing at this point. They have nothing to do with my being against Universal Health Care (I am not.) Or with my being "Conservative." (I am a Moderate.) and, just in case you wondered... they are not about my being "racist" as some Obots will undoubtedly contend. So what are they?

1) As far as I can tell, what is being bandied about in congress at this time, incorporates none of the ideas above. For me, that is strike one against it.

2) I have no faith, whatsoever, that Mr. Obama and his minions know what they are doing. Or that they will not sell us down the river to the Insurance industry. The candidate that my professional organization, the American Nurses Association, endorsed is out of the picture. (That would be Hillary Clinton.)Strike two.

3) I have no tolerance for the bullying of the citizenry. And what I am seeing in these "Health Care Town Halls" is eerily reminiscent of what I saw on 2008 Democratic Caucus videos. (Cept this time the old folks came prepared.) Strike three.

Three strikes mean "out" where I come from. And, though I support a basic form of universal health care ... what is being foisted upon us at this time ain't that.

PS. My daughter had her appendix taken out yesterday after a four month odyssey of doctors and tests. Despite the unusual cluster of symptoms she presented with, the system worked for her. She is now on the mend in a hospital that is doing the best job it can to take care of our citizens. Many thanks to Good Samaritan Hospital of Cincinnati, and to the Sisters of Charity for finding a way to keep it running, despite the high numbers of poor it serves.
Posted by Stray Yellar Dawg? at 7:14 AM