Be Grateful That At Least One Member of Obama's Adminstration Was Ready On Day One ... Carried Her Vision Forward Despite The Sexist Onslaught 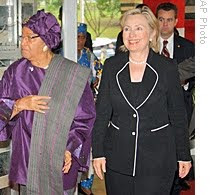 As covered in WAPO.


"Indeed, sexism has followed Clinton from the campaign trail to Foggy Bottom, as seen most recently in the posturing outrage surrounding the exchange in Congo when Clinton reacted with understandable frustration to the now-infamous question regarding her husband's views. Major media outlets have joined the gossipfest, whether the New York Times, which covered Clinton's first big policy speech by discussing whether she was in or out with the White House, or The Washington Post, where a couple of reporters mused about whether a brew called Mad Bitch would be the beer of choice for the secretary of state.


Amid all the distractions, what is Clinton actually doing? Only overseeing what may be the most profound changes in U.S. foreign policy in two decades -- a transformation that may render the presidencies of Bill Clinton and George W. Bush mere side notes in a long transition to a meaningful post-Cold War worldview."

Ya know, this is what I have always so admired about Hillary Rodham Clinton. She is a workhorse. She gets shit done. Very little distracts her. Nothing really throws her off course.

Too bad we don't have her at the helm on Health Care. Huh?

PS. Thanks to Katalusis for the link!
Posted by Stray Yellar Dawg? at 6:44 AM