1000 Speeches at Six Figures Each, Plus Book Royalties: Not Too Shoddy! 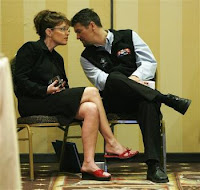 Those who scoffed when Sarah Palin resigned her Governorship in July, may want to take a second look at one of the many incentives she had for doing so.

"More than 950 requests for speeches have poured in for Palin, and over 120 candidates for office have asked her to appear, including folks running for Senate, House and state Legislature, aides said.

Palin will be doing both paid speeches, which are expected to go for six figures apiece, and unpaid speeches for political and charitable causes..."

Beyond the high priced speaking engagements and charitable work she will now be able to do, Mrs. Palin will also be able to promote her forthcoming book.

As a bonus, Private Citizen Sarah no longer has to be burdened by the parade of frivolous lawsuits that has plagued the Alaska Governor's office since last year. That has to be a huge bonus for her working class/ union family's budget. And for the Governor's office.

The petty suits, as you may recall, began when Sarah was named as John McCain's running mate. They continue to this day. Prior to the suits, all of which have been thus far dismissed, Sarah was well loved by Republicans and Democrats alike. Her approval rating in Alaska was approximately 90%.

Sounds like she made the right move to me!