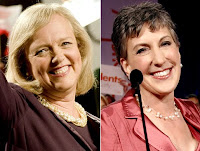 Two years after my grave disappointment in the Democratic Party ...

I woke up this morning to excellent news from California. Love both of these women, Fiorina and Whitman. They are gutsy, self made sorts. And they have what a state like California, drowning in debt, needs. I wish them both well for the November election!

Then more good news from South Carolina! Nikki Haley withstood the smear campaign against her and triumphed big. I'll admit, I'm a little more than impressed by this daughter of Sikh immigrants. Because I support women candidates from both parties. And because I have respect for the Sikhs, who seem to have a REAL "religion of peace" (unlike a certain other one that is being paraded around as "peace loving" in Gaza, and at Ground Zero.)

Harry Reid apparently believes he will run ripshod over Sharron Angle come November. We'll just have to see about that.

Blanche Lincoln also pulled out a win in spite of the White House's meddling in her campaign. Good for her!

The big winner of the evening was Sarah Palin who backed a bevy a women winners.

"Palin had four primary endorsements in play – Carly Fiorina, Nikki Haley, Terry Branstad and Cecile Bledsoe – and three won or moved on to a runoff."

Good Night to be a Woman, Indeed!