Sun and Fresh Food Going to My Head? I Actually Feel Sad for Last Year's Groupies... 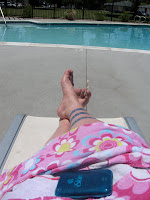 I have been in California for a week now. Surrounded by Liberals and Libertarians.

It's a curiosity to me, how one's climes can affect one's politics.

Anyways... Yesterday I went to the post office and saw some LaRouche Dems outside, protesting with signs that said "Impeach Obama." Twenty-somethings, bitching about how Obama lied. How his White House is bought and paid for by Wall Street. How he stole their votes.... and then sold them out.

I felt sorry for them. Not bitter. Not angry. Just sorry. Sad, as I imagined them former Obama groupies. So trusting... these fresh faced, first time voters of 2008. Trusting of a Democratic party that would goad them with promises from of "Superpresident," and then turn on them ... mortgaging their futures... in some "too big to fail" bank scheme.

I have yet to meet a midwest style "Conservative" in these parts. I don't see any pick-up trucks with McCain / Palin still on their bumpers, like I do back home. (There they just scratch out the McCain part and hope for a future Palin run. No kidding.) Besides the Libertarians who live in the hills surrounding the SF Bay. The ones who want nothing to do with either major party. Besides them... it seems that the LaRouche Dems ARE the "conservatives" here. In the sense that they kinda sound like the "smaller government" crowd. They want Obama impeached.

At any rate, I am quite surprised at how few pro-Obama propaganda pieces I see in greater San Fran. I suppose the lustre has worn off?
Posted by Stray Yellar Dawg? at 5:57 PM