Under The Bus, Steve Driehaus: Dems Pull Out Funding for Ohio Rep. 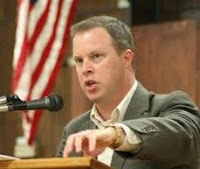 Remember when State Rep. Steve Driehaus of Ohio was strong armed into voting FOR Obamacare? I distinctly remember hearing something to the effect of "we'll take care of you in 2010, Steve" at that time.

Well FORGET IT, Steve. The Dem Party has to cut its losses, you know, hence...

they're scaling back advertising plans to help a number of lawmakers including Reps. Betsy Markey of Colorado, Harry Teague of New Mexico and Steve Driehaus and Mary Jo Kilroy of Ohio. They've also cut back on ad campaigns to defend Democratic-held open seats in Indiana and Kansas.

Can't say *I* didn't see it coming. And, really... it's a shame if Steve didn't. Cuz now, not only are we set to lose the district... but he is embroiled in lawsuits to stop the "pro-life" slander that threatens to end his political career in these parts. To make matters worse ... his lawmaker sister, Denise Driehaus ... may go down with him.

We coulda had a Hillary at the head of our party.

PS. No Driehaus bashing in this thread. Steve and Denise are two of the "good guys." They are being screwed like the rest of us.
Posted by Stray Yellar Dawg? at 7:04 AM