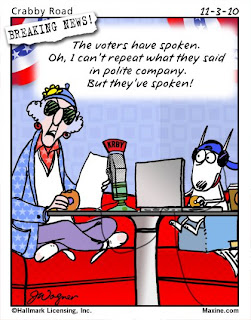 Anna Belle Pfau sets the record straight. And then goes on to explain why it is important for parity that we, as women, embrace and work with BOTH political parties.

I mean... did you even know that seven Republican women candidates were pro-choice? (If you were waiting for N.O.W. to tell you, no wonder you were confused.)

But, see... here's what happens when women REALLY vote on issues that matter to us and abandon loyalty to their Dem party masters.

From the TGW link:

(No surprise there... for those of us who have been watching closely.)

Quoting one of Anna Belle's tweets about the irrelevancy of N.O.W.:

"Has Terry O'Neill lost her mind? Women voted in the exact same numbers they did in 2008. They just broke evenly this time."

Interesting..... you'd never know it by listening to the MSM talking heads (including NPR and PBS) would you?

Oh... and... just in case you are still under the mistaken impression that the GOP turned out *all* the bigots this year... read this women's story of being an Asian Immigrant and a GOP poll worker. Author, Sasha Gong, was harassed and repeatedly told how little she knew by poll workers from, guess where? The Democratic party. Her account of the bigotry she experienced Tuesday will enrage you!

She ends her article saying that her story "pretty much summarized the story of many in the TEA party."

It's been the story for us PUMAs as well, Dr. Gong. I guess we are in good company?!