Same Message From Palin and Obama. Which Will Be Remembered? (That is the question.) 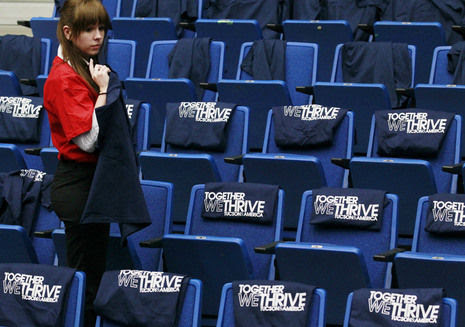 By most PUMA accounts that I have read so far, President Obama delivered a decent speech last evening. Though many feel that using a memorial service to launch a campaign slogan was tacky.

I think it is fair to assert that Mr. Obama's speech may not be what we remember about this fateful week. Except, perhaps, to bemoan the poor taste of printing t-shirts for a memorial service.

It could well be Sarah's one-liner "Blood Libel" that sticks in our minds. (Given, it will mainly be remembered because the Left is making such a huge deal out of it. And the middle of our beloved country is waking up saying "well, yeah... that's what this smear campaign was.")

I have to say that I am pleasantly surprised to hear the same essential message coming from Obama and Palin. "Together We Thrive" is not all that different from "Cut the blood libel." It's just that one will be remembered. And one, despite being emblazoned on a gazillion t-shirts, may not be.

I hope this is my final statement on this subject.

H/T to Uppity Woman for the photo. And to Tennessee Guerilla Women for the "blood libel" links.

And, now, as myiq asserts ... I will be condemned for trying to observe both sides without a jaded ear.

And as Anna Belle laments, being objective will get us both labelled "Right Wing" by our former allies.
Posted by Stray Yellar Dawg? at 5:44 AM