If All Goes Well in Libya It's To Obama's Credit, If We Get Mired in Another War... That's Hillary's Fault 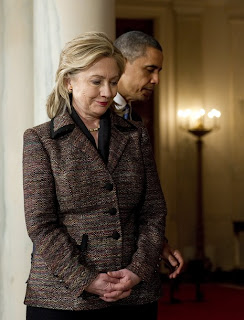 I ventured this "Hillary's to blame, Obama gets another peace prize" Libya hypothesis a couple of days ago, and posted it in response to a couple of the blogs I frequent.

This morning I find, fellow PUMA, D.K. Jamaal posting the substantiating evidence for my theory.

Yep... here we go again.... Mr. Sullivan is at it with his woman hate. (I won't even remind you of how he obsessed over Palin's uterus.)

Meanwhile... The Daily Beast offers a fairly positive summary of the "Women Who Called for War." But, believe me... in the end... Hillary (and to a lesser degree Susan and Samantha) will be blamed so that Obama can keep up his "great peacemaker" facade.

As that idiot Sullivan actually wrote:

"I don’t think it’s wrong for a President of the United States to issue an opinion about some madman like Gaddafi ...snip.... this initiative, this, this, this no-fly zone, this war essentially, is, is a Hillary-McCain concept."

Yes. Sullivan actually said that Hillary Clinton and John McCain cooked up the Libya no-fly zone while all Obama wanted was to *say* Gadaffi must go.