Every Once in a While I Find Out Something New About a Former President That Makes Me Proud (even if I did not vote for him.) 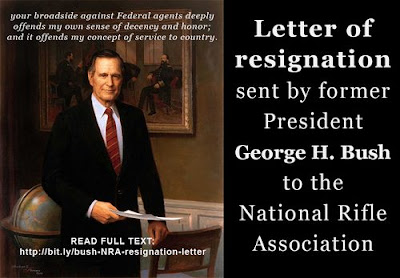 I was outraged when, even in the wake of the Oklahoma City tragedy, Mr. Wayne LaPierre, executive vice president of N.R.A., defended his attack on federal agents as “jack-booted thugs.” To attack Secret Service agents or A.T.F. people or any government law enforcement people as “wearing Nazi bucket helmets and black storm trooper uniforms” wanting to “attack law abiding citizens” is a vicious slander on good people.

Al Whicher, who served on my [ United States Secret Service ] detail when I was Vice President and President, was killed in Oklahoma City. He was no Nazi. He was a kind man, a loving parent, a man dedicated to serving his country — and serve it well he did.

In 1993, I attended the wake for A.T.F. agent Steve Willis, another dedicated officer who did his duty. I can assure you that this honorable man, killed by weird cultists, was no Nazi.

John Magaw, who used to head the U.S.S.S. and now heads A.T.F., is one of the most principled, decent men I have ever known. He would be the last to condone the kind of illegal behavior your ugly letter charges. The same is true for the F.B.I.’s able Director Louis Freeh. I appointed Mr. Freeh to the Federal Bench. His integrity and honor are beyond question.

Both John Magaw and Judge Freeh were in office when I was President. They both now serve in the current administration. They both have badges. Neither of them would ever give the government’s “go ahead to harass, intimidate, even murder law abiding citizens.” (Your words)

I am a gun owner and an avid hunter. Over the years I have agreed with most of N.R.A.’s objectives, particularly your educational and training efforts, and your fundamental stance in favor of owning guns.

However, your broadside against Federal agents deeply offends my own sense of decency and honor; and it offends my concept of service to country. It indirectly slanders a wide array of government law enforcement officials, who are out there, day and night, laying their lives on the line for all of us.

You have not repudiated Mr. LaPierre’s unwarranted attack. Therefore, I resign as a Life Member of N.R.A., said resignation to be effective upon your receipt of this letter. Please remove my name from your membership list.


Thank you President Bush, for standing up to extremists.