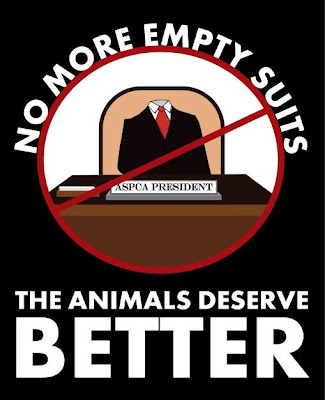 The outgoing President of the ASPCA leaves in his wake a legacy of controversy and betrayal. At its best, the ASPCA of 2013 is merely ineffective. At its worst, it causes animal suffering and death. It is bloated, bureaucratic, and insincere. But it doesn’t have to be. It could, in fact, be amazing. And it all depends on who the ASPCA Board of Directors selects as the new President & CEO.

In a letter to the ASPCA Board of Directors, we urge them to consider how the next president could impact lifesaving for companion animals, wild animals, “working” animals, “farmed” animals and more. The possibilities are breathtaking.

Given the vast, untapped potential that exists to help animals through the ASPCA; given how much the ASPCA could positively affect American society on behalf of animals in truly profound and lasting ways; and given the gravity of what is potentially at stake; we ask them not to pick yet another, in a long line, of empty suits. The animals deserve better.